Wow. So it has been an entire year since I’ve posted anything… and I feel a little–no, scratch that, I feel VERY MUCH–horrified that I’ve been so inattentive to this blog! I guess with the end of senior year, starting a different job, and just general life, I’ve been a bit distracted. I was also out of the country for several months (maybe I’ll have to start another blog for life/travels…?) with limited access to internet, but still, no excuses! (Right Sam??) Perhaps I should make my year’s New Years resolution be to post on this blog more often–especially since with a theme of cupcakes/baking, you know it can’t be for me to give up sweets…! And speaking of, I better get to my latest cupcake post. Goodness knows I’ve kept you all waiting long enough! At least I can promise you, they’re worth the wait!

I love these cupcakes. They are to die for. Diet-breaking worthy. Make-these-for-every-birthday-here-on-out worthy. If you haven’t quite picked up on it, these Yeast Cupcakes (adapted from a traditional St. Louis Gooey Butter Cake) are really yummy. They might not be the most beautiful cupcakes I’ve ever made (that title would probably have to go to my mint chocolate cupcakes, or maybe these butterscotch ones), but they definitely rank among the tastiest. They don’t take too much work either–just a good amount of time since the yeast needs to proof for several hours. But with an introduction like that, how could you not find time to make these? Seriously, these cupcakes are delicious and unlike any others, and I hope that piques your interest enough to give them a try!

Start by lining either 12 or 18 cupcake molds with liners. Set aside.

In a small bowl, mix the milk and warm water. Add the yeast and whisk gently until it dissolves. After a few minutes, mixture should foam slightly.

Using an electric mixer, cream together the butter, sugar, and salt. After scraping down the sides, add in the egg. Next, alternate between adding the flour and the milk/yeast mixture. Continue to beat mixture on a medium speed until the dough starts to pull away from the sides of the bowl–approximately 3-5 minutes.

Press the dough into the bottoms of the cupcake tin. Try to use equal amounts in each. You do not need much dough in each liner, as it will rise a great deal, and you’ll want to save room for the topping. (If you prefer a greater cake to topping ratio, then you may end up using the whole batch for 12 cupcakes, which is what is pictured below. There will be very little room left for the topping unless you push down or remove some of the dough after it has risen. If you prefer more topping, you can either distribute the batch among 18 liners so there is less dough in each, or you can use taller cupcake liners that extend above the edge of the cupcake tin, so there will still be room even after the cake rises.)

Note: I FILLED THESE TOO FULL! This dough easily doubles in size, so by the time my cupcakes rose, there was no room left for the topping!

Cover the unbaked cupcake dough with plastic wrap or a tea towel, and put it in a warm place to let rise. After leaving it for 2 1/2 to 3 hours, the dough should have doubled in size. While letting the dough rise, you can prepare the topping. 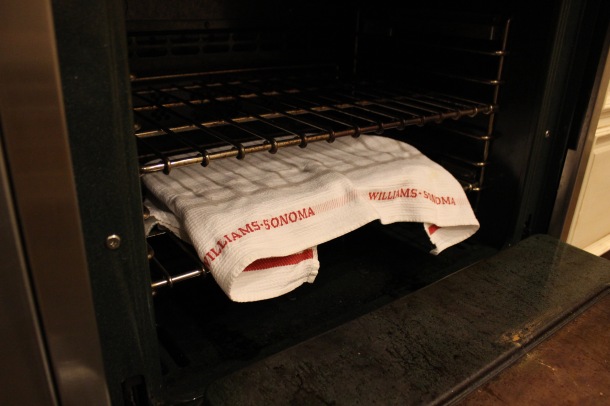 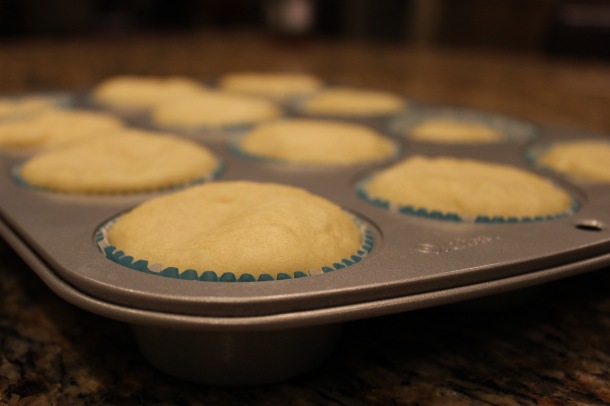 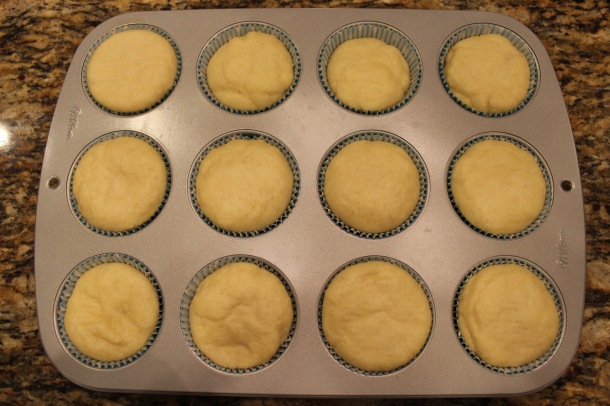 In an effort to make room for the topping, I tried to push down the centers of the cupcakes to form these little pockets. In the end, it didn’t work very well… (Perhaps actually cutting out the dough might have worked better than just squishing it down.) The dough just rose again in the oven–cue the massive *duh*–and ended up making a HUGE mess in my oven. I also piled on way WAY too much topping, as I was hoping it would hold its form better. It didn’t (see pictures below…) No worries, though, as I’ve learned from my mistake! Read below for my tips and solutions!

To prepare the topping, start by mixing the Lyle’s Golden Syrup with the water and vanilla. Set aside. 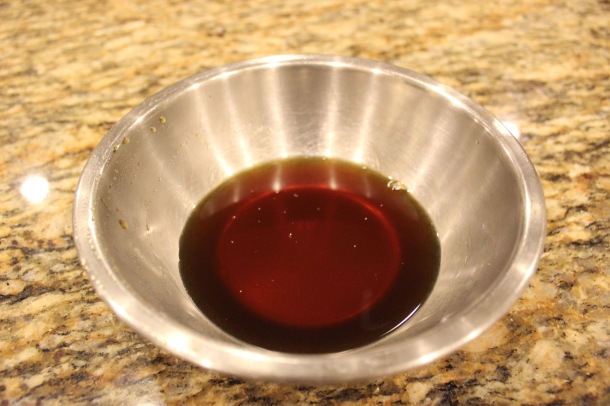 In an electric mixer, cream together the butter, sugar, and salt until light and fluffy–about 3 t0 5 minutes. Scrape down the sides and beat in the egg.

Alternate between adding the flour and syrup mixture, scraping down the sides after each addition. 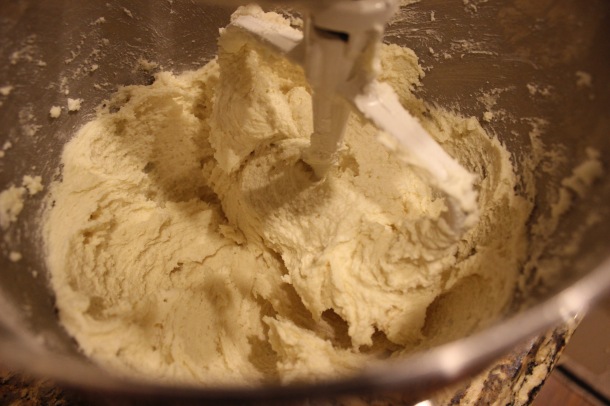 Spoon the topping in large dollops over the risen cake dough. The cake portion will rise even more in the oven, so take note of that when adding the topping. Spread the topping over the dough as evenly as possible.

Bake the cupcakes for 27-32 minutes or until the top has turned golden brown. There may be waves or uneven areas on the cupcake’s surface, but this is normal. The center should still be liquid-y and gooey from the topping as well, even when done. 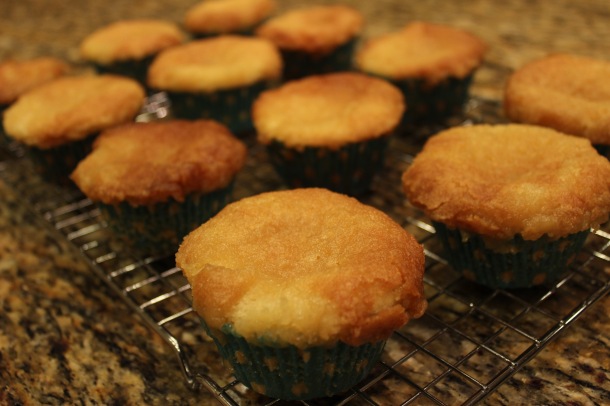 Allow cupcakes to cool before dusting the tops with powdered sugar (optional).

So. I ADORE these cupcakes. It’s a shame that Letter Y is so late in the alphabet because oh how I wish these cupcakes had come into my life sooner! That being said, it wasn’t the prettiest path getting here… and I mean that very literally. I completely misjudged how much the dough would rise, the fact that the topping would melt more than hold its form, that these cupcakes would expand a ton while baking, etc. The result was an overflowing, sticky, baked, crusty, (yummy), pedagogical mess. I will be sure to post pictures below. I will also, however, post the very helpful tips and lessons I have learned! Definitely place a baking sheet underneath these cupcakes. I had an inkling of the disaster that might occur with the spillage when I first tried out these cupcakes, so I luckily placed a baking tray underneath the rack in the oven; thank goodness!! It didn’t catch all of the overflow, but I shudder to think of how overwhelming the cleanup task (already a big feat) would have been without it. In case you’re wondering, I ended up making two batches: my first attempt had a baking sheet on the rack below, so it wasn’t directly touching the cupcake tin; in the second batch, I put the cupcake tin right on top of the baking tray. I feel like the second batch was just a tiny bit drier than the first, but they were still completely delicious. I can’t definitively say whether that was due to the direct contact with the baking tray (more direct heat to the bottom of the cupcakes, less air circulation) or whether I just left them in for a minute longer. The dryness was honestly negligible to me, for which I have proof since I think I devoured the second batch even faster than the first! If you decide to make these (*highly recommend!*), it’ll just be up to you on whether you want to risk some uncaught overflow with the first method, or hazard a slightly drier cupcake but with a guaranteed easier cleanup.

My other tip is regarding the topping. If you enjoy having a more authentic cupcake feel, with majority cake and minority topping, then certainly feel free to use more dough in the bottom (in my pictures above, I used pretty much all of the dough split equally between 12 cupcakes–they rose to be about level with the edge of the tin, so I then had to try to create some room/pockets for the topping); this will obviously leave less room for the topping, but I promise you that the end cupcake will still be sweet enough and completely delicious! If, however, you’re familiar with a traditional St. Louis Gooey Butter Cake and prefer a nice, substantial layer of topping that rivals the thickness of the cake, you have two options. Firstly, you could put less dough in the bottom of each tin, in which case you might be able to get anywhere from a few to a half dozen more cupcakes out of this recipe. This will obviously leave you with more room in the tin for topping, even after the dough has expanded and risen. I have not personally tried this method, so I cannot say how it might affect baking time, but I’m sure checking the cupcakes just a few minutes earlier than usual will take care of that. The second option is to use higher cupcake liners (see pictures below). I bought mine from Michael’s, and while they did add some height and effectively increase the topping amount a bit, because of the way they were folded, there were still some short areas where the topping was able to escape and overflow. Next time, I’ll probably just fold some of my own! Or maybe add a height extension cuff kind of thing to normal liners… basically, time for more experimenting! If you, however, don’t feel like reliving arts and crafts class, the liners from Michael’s (or any tall liners you can find) will work just fine for adding a bit more space for topping. The taller liners do, however, slightly accentuate the fact that these cupcakes sort of fall/settle so that they have a wavy, bumpy top. In some places, the cupcake might sink a bit, and the baked crust left on the paper leaves a subtle trace. I don’t think it matters at all (especially since the best part of these cupcakes is not really their aesthetic value) but you can see my pictures below and then decide. At the end of the day, whether you have just a little topping or a lot, extremely messy cupcakes or instagram worthy treats, or any other form of these desserts, I don’t think you can go wrong! They’re so delicious, and they’re a unique hybrid between a traditional cupcake and a traditional gooey cake. Best of both worlds! 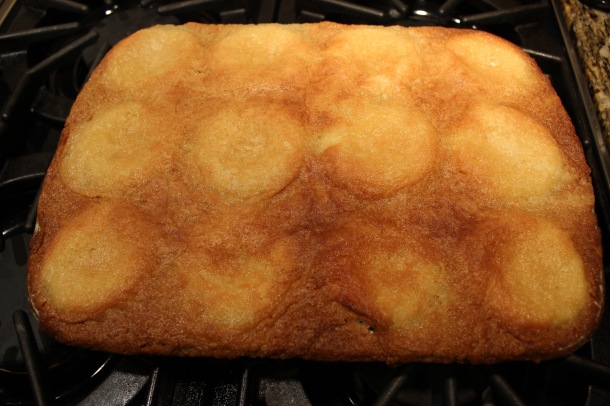 These cupcakes must be pretty damn tasty if I love them even after this fail/mess! 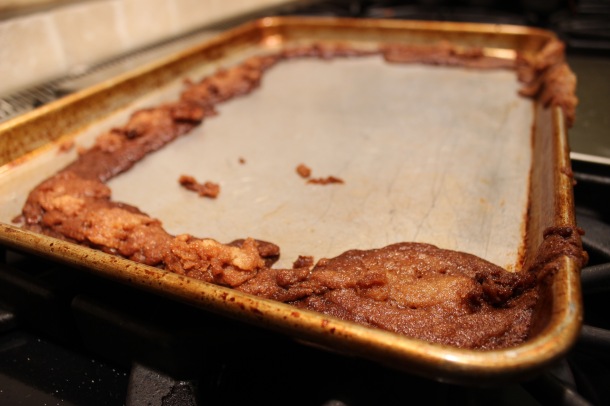 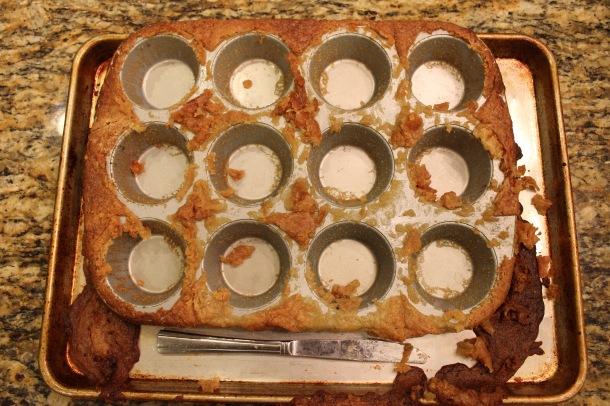 At least I’ve learned from this experience…! One solution below: 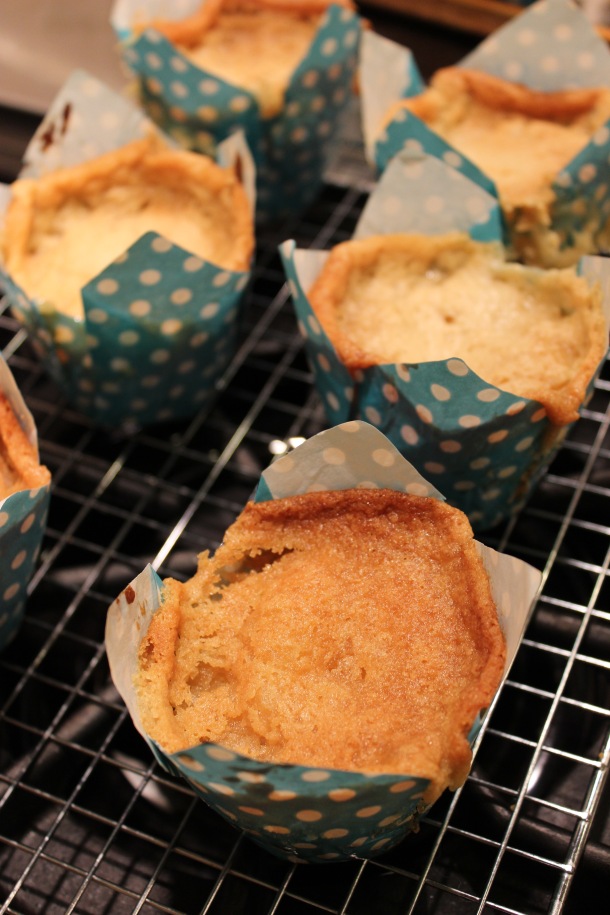 I hope this post makes up for a year of silence! If there’s one thing that I’ve learned while working on this blog, it’s that cupcakes can solve damn near anything! Hopefully this post works. 🙂 Love you guys!