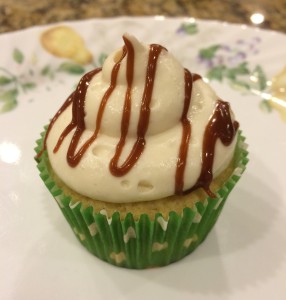 I have been looking forward to making these white chocolate cupcakes for months! I absolutely adore white chocolate (even if it’s not technically chocolate…), and I’ve planned on doing this flavor ever since the beginning of The Amazing Bake. And just like with many of my other recipe ventures, I discovered something totally new while researching for Letter W! Have you ever heard of caramelized white chocolate? I definitely hadn’t… Once I started looking into it more though, I found out that it is SUPER cool! I mean, I’m totally a food geek I guess, but I think it’s amazing that you can turn a hunk of white chocolate into a slab (or ganache, in my case) of caramel-y goodness! That’s what caramelized white chocolate is, although it retains some of the original white chocolate flavors even after the whole process. It makes sense, since white chocolate is basically just a mix of fat, dairy, and sugar, but I still had never thought of caramelizing it until I began to work on Letter W. Anyway, I just wanted to share some of my excitement and wonder that I’ve experienced while making these white chocolate cupcakes! I hope you enjoy, and please read through the bottom to see some of my advice, regrets, choices, etc. Thanks! 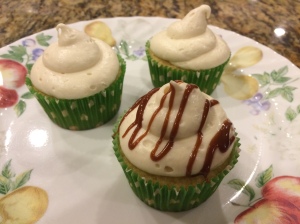 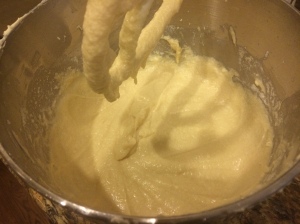 1. Preheat oven to 350 degrees and line cupcake tins with 16 liners.

2. Place chopped bits of white chocolate in a heatproof bowl or in the top of a double boiler. Fill a pot or the bottom of the double boiler with an inch or two of water so that the top bowl can rest without touching the water, and heat it until simmering. Place bowl with chocolate on top, careful to make sure that none of the water gets into the chocolate. Stir until the chocolate is melted, remove from heat, and let cool until tepid (lukewarm). 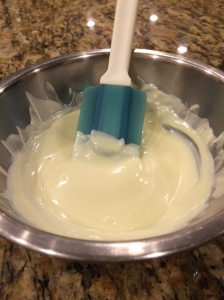 3. In a small bowl, mix together both flours, baking powder, and salt.

4. In a measuring cup, mix together the milk and vanilla.

5. In a stand mixer (or a large bowl, if using a handheld electric mixer), beat together the butter and sugar until light and fluffy. Beat in the eggs, one at a time, waiting for each egg to be completely incorporated before moving onto the next egg/step. Then add in the flour mixture and milk, alternating in little batches between the two.

6. Fill the cupcake liners with batter. They should be basically full, as these cupcakes only rise a little bit. 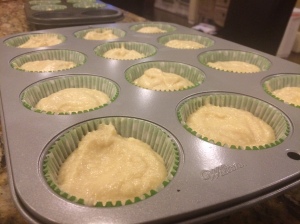 7. Bake them in the oven for 13-15 minutes, or until a toothpick can be inserted and drawn out cleanly. I’ve found that these cupcakes go from perfect to overdone very quickly, so stay vigilant and check them a few minutes early if you’re worried. They should still be a whitish yellow all the way through and only go golden when they’re overdone. After cooling for 10-15 minutes in the pans, remove the cupcakes and let them cool fully on wire racks.

8a. If you’re planning on filling these cupcakes with the caramelized white chocolate ganache (or you could use jams/other filings), cut a hole out of the center of each cupcake. These should not go all the way to the bottom. If it’s easier, you can use a knife to cut out a cone shape, although I found even when cutting out a hole that was shaped more like a well, you could still use the tip of the knife to easily loosen the bottom of the cut part of the cupcake and pop it out while leaving the bottom of the cupcake intact.

i. Next, use the ganache (if it has been stored in the refrigerator, pop it in the microwave for a few seconds until it’s warm enough to scoop/drizzle) to fill the holes. Fill them until the ganache is flush with the top of the cupcake.

ii. Frost the cupcakes as you would regularly, using the icing to cover up the hole and ganache.

8b. If you’re not planning on filling these, just skip the past few steps and frost the cupcakes once they’re cool. 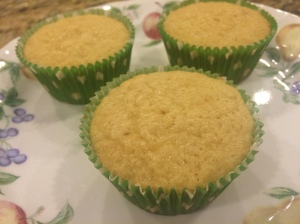 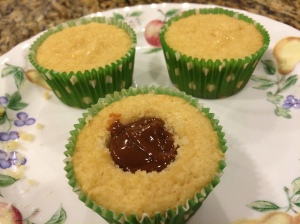 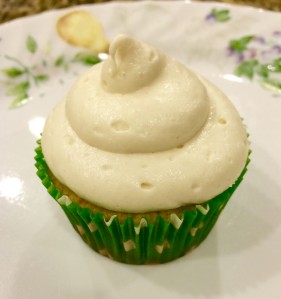 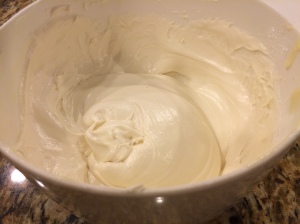 Melt the white chocolate bits with the same method as used above with the cupcakes. Let cool until tepid.

Beat together the cream cheese and butter.

Gradually mix in the confectioner’s sugar, adding it in in slow increments so as to avoid a mess.

Slowly mix in the cooled white chocolate and vanilla. For a denser frosting, use it just after all ingredients have been mixed together smoothly. For a fluffier, lighter frosting, keep beating for several more minutes. If the frosting appears to be too soft, place it in the fridge for a short period of time before using it to frost. Also, if your chocolate was still warm when added, it may have melted the icing a bit so it appears soft. Once the chocolate has a bit of time to firm up (either in the fridge or ten on the counter), your frosting might thicken as well. 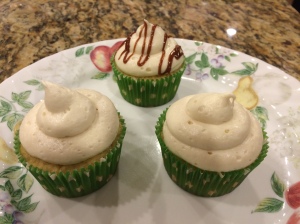 12 ounces of high-quality chopped white chocolate (the higher the percentage of cocoa butter the better; do not use grocery store, bagged morsels)

1/3 cup heavy cream (for ganache only) 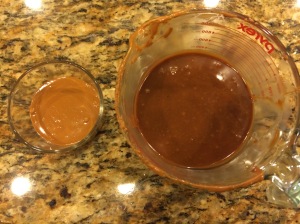 2. Lay the chopped chocolate onto a baking tray.

4. Remove the white chocolate and stir it with a clean spatula. Move around the pieces so nothing burns on the bottom, depending on how melted the chocolate is, start to mix it together. Spread it out in a thin, even layer again as best you can. Place the baking tray back into the oven.

5. Continue to bake for 10 minutes, remove and mix, spread the chocolate out again, and put back in the oven. (You’ll repeat this process for 60-90 minutes most likely). The final product should be a warm caramel color, slightly darker than peanut butter. When you reach this color, take out your chocolate and let it cool.

6. If your goal is just to create caramelized chocolate, you’ve done that! At this point, you can scoop the chocolate into a glass container while it’s still melted, and it’ll cool with the same consistency as chocolate (so definitely solid at room temperature). It will keep in a sealed, room temperature glass container for weeks, if not months (although I seriously doubt it would last that long!).

Note: For the first time or two you remove the chocolate from the oven, it will most likely be extremely dry, stiff, pasty, and not at all smooth. Keep mixing it for several minutes, working and stirring the chocolate until the color is even throughout and it’s generally one uniform blob. After putting it back in the oven and repeating this process for a couple of times, you’ll eventually reach this magical moment: after you’ve been stirring the crumbly chocolate for several minutes, it’ll start to come together until it can be smoothed out and actually resembles melted chocolate. Keep mixing that until it’s as smooth as you can get, and from then on out, each time you remove the sheet you should be able to work with the chocolate so it eventually returns to that soft, creamy, texture. As much as you may want to taste the chocolate then, do not!! It’ll be quite hot. Patience will be rewarded! 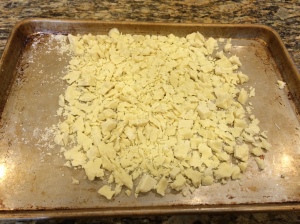 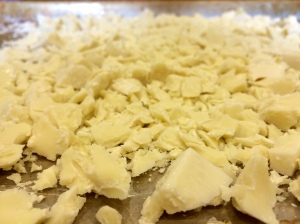 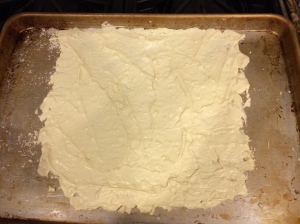 After 10 minutes, before touching it 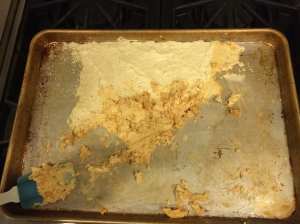 First attempts at stirring it; do not be alarmed if it does not smooth out much at this point 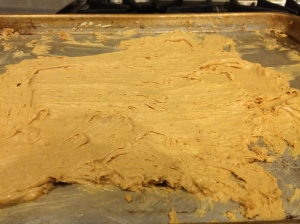 A baking cycle or two later 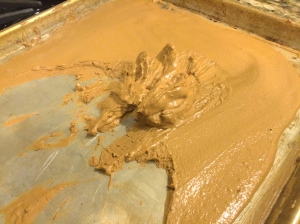 If you keep working at it, it’ll eventually start to smooth out 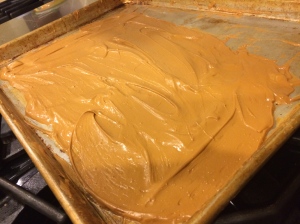 Even once it’s smooth, keep mixing it every 10 minutes to keep the bottom from burning. You’ll also be able to check the color then, too 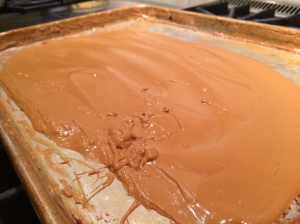 Smooth and a beautiful caramel color – my camera didn’t do it justice!

If, at some point, you choose to turn it into a ganache however, this is where you’ll use the heavy cream.

7. First, break up 8 ounces of that caramelized white chocolate into small bits and put them into a heat proof bowl. Set aside.

8. Heat the cream in a sauce pan until it’s steaming and just starting to simmer. Remove it from the heat.

9. Pour the cream over the caramelized chocolate bits and let that sit (before stirring it) for a minute. After a minute or two, once the heavy cream has had a chance to heat and melt the chocolate, stir the mix together until you’re left with a smooth, thick, delicious ganache! 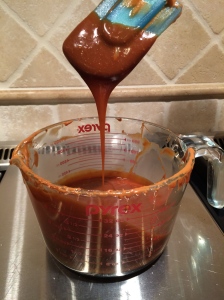 This is the ganache, after it has been mixed with the heavy cream 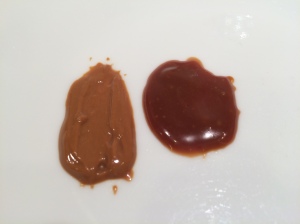 The ganache is on the right. There is a difference in both color and texture

If you try nothing else from this recipe, please try the caramelized white chocolate. PLEASE. Even if you don’t use it to fill these cupcakes, it makes a great topping for ice cream sundaes, brownies, and plenty of other things. If you haven’t picked up on it already, I am OBSESSED with that stuff! Seriously, I considered eating it all and not even baking the rest of the cupcakes…! But of course, I would never actually do that–especially since white chocolate cupcakes sound delicious, too!

I will say, however, that this recipe has been a bit tricky for me. The first time I made them, I was still playing around with how long to bake them for, and I way over did them. Of course I would mess up one of the few recipes that uses a somewhat expensive ingredient! (On a side note, if you’re looking for high quality white chocolate that isn’t crazy expensive, try going to Whole Foods. While I know that sounds really surprising since Whole Foods is generally pretty pricey, they actually sell blocks of Callebaut white chocolate that are about $5 for 8 ounces. I’ve found this is somewhat on par with the prices that you’d find at a grocery store, but the chocolate is of a much higher quality!) Anyway, when I baked the next batch, our oven was acting up (extremely uneven heat distribution…) so the top rack was over baked once again, but the bottom cupcakes came out perfect. No worries though, because I think I’ll make some cake pops out of the dry cupcakes! I did frost the rest of the white chocolate cupcakes, and I think they were really good!

However, PLEASE NOTE: if you’re planning on filling the cupcakes with ganache like I did, I highly recommend cutting the sugar in the cake and frosting! Believe me, I have a huge sweet tooth (I have a cupcake blog, for Pete’s sake), but these cupcakes were even a bit too sugary for me! I haven’t experimented yet, but perhaps try 1/2 to 1/3 cups sugar in the cake part and 1 cup confectioner’s sugar in the frosting (those are totally just guesses though!). Remember, the white chocolate will add sweetness too, along with the ganache filling obviously. I can’t believe I didn’t think of that factor before making my batch though! Oh well. I never set out to be perfect, and I don’t mind making mistakes if they might help some of you! Still, I’m happy with these cupcakes, and I’m also just happy to have had time to work on my blog over the holidays!

I hope you all have had a great holiday season and New Year. This time of year is perfect for reflecting and giving thanks, and  I am so appreciative of my family, friends, community, and you guys who read my blog! I can’t believe how far the Amazing Bake has come since I started it in January of 2012, and fingers crossed that it’ll continue to grow this year. Cheers to a happy, healthy (along with the occasional decadent desserts), and productive 2015! Take care everyone. 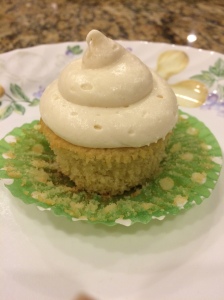 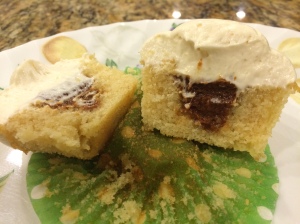