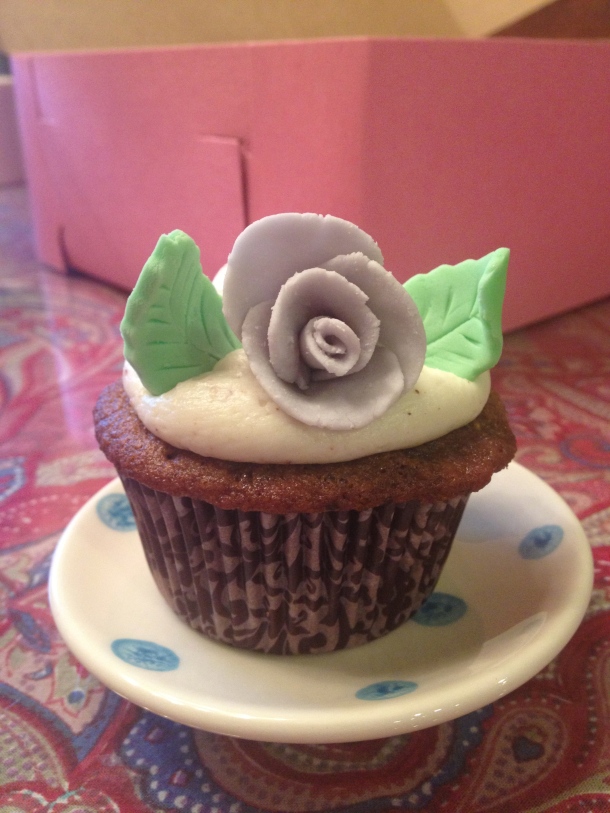 Wow. I guess it has kind of been a while…

You guys, I am so SO sorry for having taken so long to upload this post! I actually made these cupcakes months ago, and I have literally not gotten a chance to really sit down and write about them in any detail until now. I really hate skimping on the writing whenever I upload a post because I like to include all of the notes, observations, reactions, etc. that I experience when I bake. That being said, I kept putting off letter Q (and letter T as well actually!) because I never thought I had enough time to get all of those details down, and now it has been so long that I have forgotten most of them! 😦 I’m still going to try my absolute best to remember all of the important parts, but this might end up having to be a shorter post just so I can move on and get caught up with the blog.

(What an annoying catch 22 I would just like to point out! If I had tried writing this immediately after baking the cupcakes, I wouldn’t have had time to write about all of the little details I would have remembered. Now that I actually have time to type up a long, thorough blog post though, I can’t remember those details, so it’s going to be kind of short. Since it’s going to be short due to the lack of detail, I would have had time to write this earlier in the first place! But then it wouldn’t have been short because I would have remembered more, so I would have actually had to wait until I had more time… and thus the vicious cycle continues.)

Anyways, here is my post for letter Q! Before figuring out what to bake for this, I was having a lot of trouble coming up with possible flavors for Q without “cheating” and using an adjective or something (i.e. “quick” or “quality” cupcakes weren’t going to cut it for me). In the end, I have to give credit to my dad for recommending looking for a recipe in a different language. After a few more minutes of brainstorming and searching the internet, we found a recipe for a Quatre Épices cake, or Four Spices cake when translated from French, and I knew we were in business. So, without further ado, here’s the recipe for some absolutely delicious Quatre Épices Cupcakes with Browned Butter Frosting! 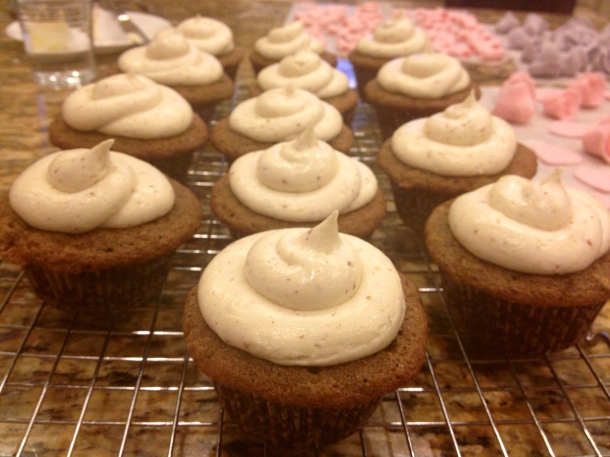 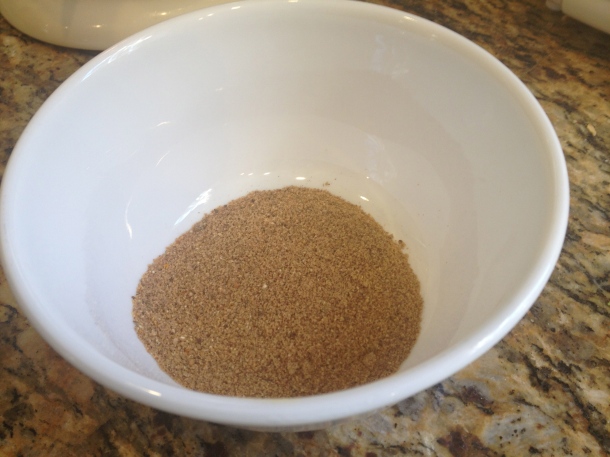 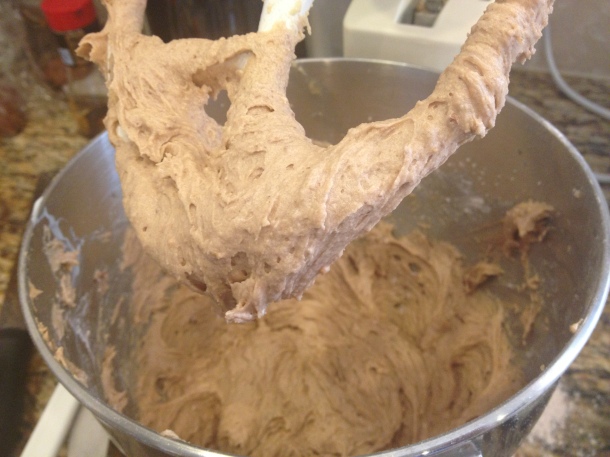 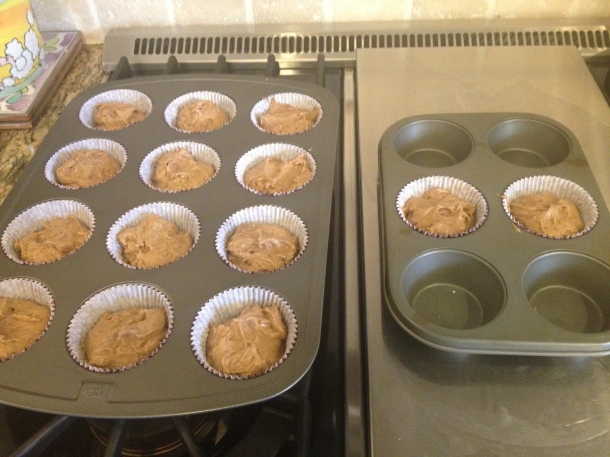 Beat butter, brown sugar, and zest in a large bowl with a mixer until fluffy. Add eggs and beat until well blended. In another bowl, combine flour and other dry ingredients. Add flour mixture to butter mixture one-third at a time, alternating with buttermilk half at a time, and beating on low speed after each addition until blended. Pour batter into liners.

Bake until a toothpick inserted in center comes out clean, 15 to 18 minutes. Let cupcakes cool in the tins for about 10 minutes. Remove cupcakes from tin and place on a cooling rack; let cool completely. 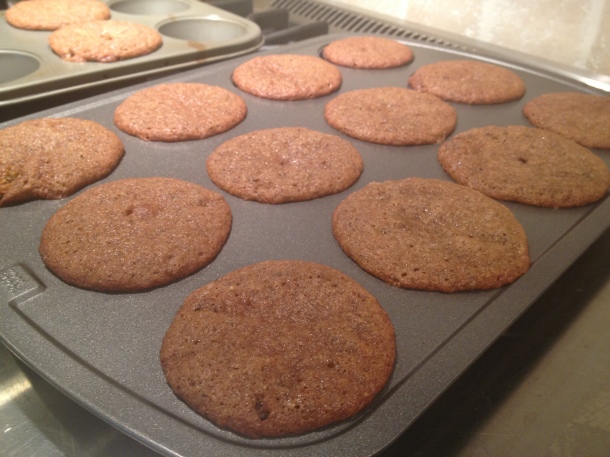 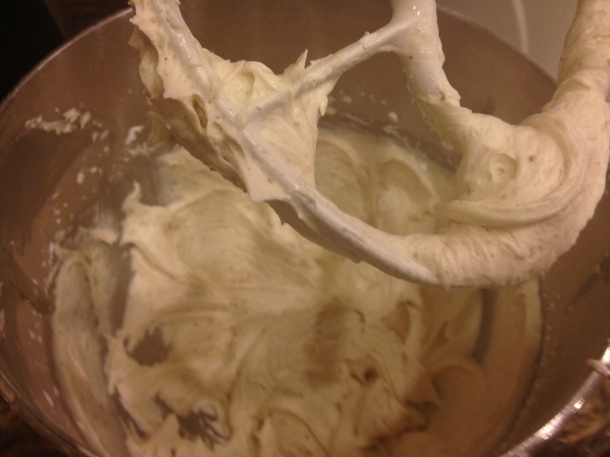 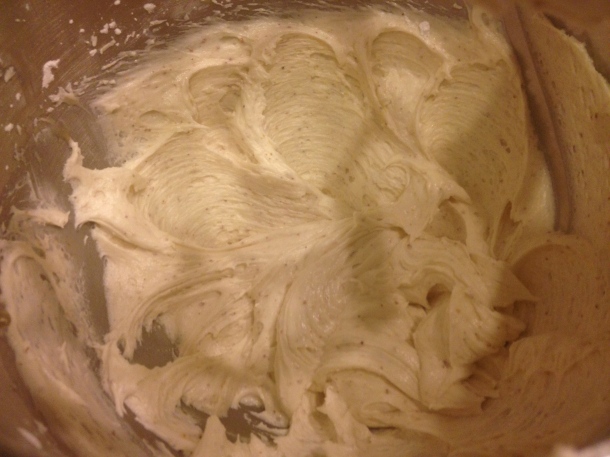 Cook butter in a medium saucepan over medium-low heat, swirling pan occasionally, until deep golden brown, 10 to 15 minutes. Pour into a mixer bowl, let cool, then chill until firm enough to beat, about 30 minutes. Add remaining ingredients and beat until fluffy, 1 to 2 minutes, occasionally scraping inside of bowl.

If you’re nervous about browning the butter, I suggest reading http://www.howsweeteats.com/2012/10/exactly-how-i-brown-my-butter/ or http://bakingdom.com/2013/06/tutorial-tuesday-how-to-brown-butter.html . The pictures (and instructions) are really pretty helpful! 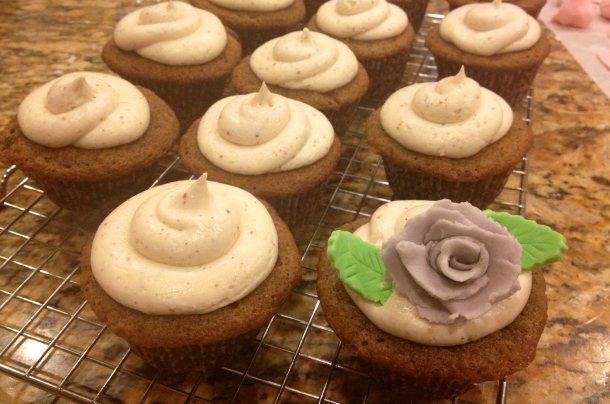 Ok so that’s about it! I probably had enough icing to very generously frost a standard dozen cupcakes. When I when frosted average swirls instead of giant ones, I had enough for all my 14 cupcakes.

I’m not going to lie, I was a little nervous about how these would taste! Basically, before baking the cupcakes, I was a little dubious about to the savory spices and cocoa powder. Once I tasted the cupcakes though, any and all anxiety melted away with the first bite of rich, heavenly cake and smooth, flavorful frosting! Overall, these reminded me of pumpkin cupcakes… but without the pumpkin. I know, I know, that sounds kind of crazy or stupid, or maybe that just sounds like I’m describing nothing (you can’t really have pumpkin cupcakes without pumpkin right?) What I mean, though, is that these cupcakes have a wonderful, deep, warm, spicy sort of flavor that I normally only taste in or associate with pumpkin cupcakes/any other Autumn treats. They really would be a great Fall dessert! I can totally picture serving these at a Halloween or Thanksgiving party for dessert along with some warm apple cider! Mmmmm, I’m starting to fantasize about Autumn now; it is one of my favorite seasons! Anyways, I am TOTALLY getting off topic here, so I better wrap this up quickly before I further go off on a tangent! These cupcakes were surprisingly delicious and oh so moist. While I do think they lend themselves to a more seasonal dessert, I know I would enjoy them any time! I know they can look kind of intimidating at first, what with the somewhat unconventional ingredients (as far as cupcakes go) and the browned butter, but I highly recommend these Quatre Épices cupcakes. Seriously. Be adventurous! Try them! You won’t be sorry!

And with that glowing recommendation, I’ll leave you guys to it. Also, keep your eyes peeled for another blog post (letter T) coming very soon! Many of you guys probably already know what flavor I chose for that post (I even asked a bunch of you if I saw you in person to help me choose between two equally delicious sounding recipes), but if you don’t know, I’m not going to ruin the suspense! Just know that it was probably one of the most in demand, popular, and decadent recipes I’ve made to date. So by now, hopefully your mouths are watering in anticipation; if you can’t wait until letter T, I really do suggest you try this recent Quatre Épices recipe. It’ll be just as satisfying, and it won’t disappoint, I promise. As always, have fun with any and all baking, and let me know how it goes! Love you guys tons. It feels so good to be back after so long! 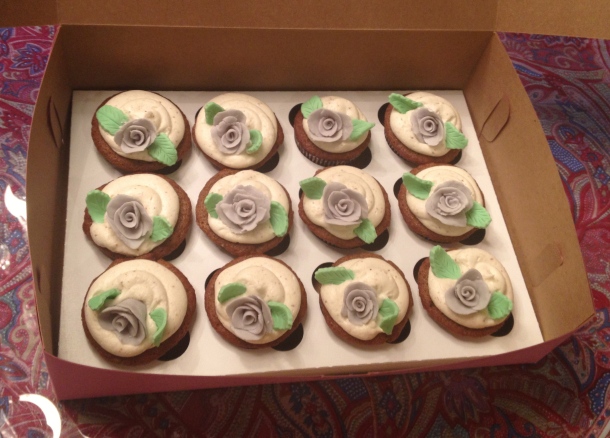 *Prior to making this for the first time, I had no idea how many cupcakes it would make since the original recipe was meant for a cake. I ended up baking 14 cupcakes, but they had sort of muffin-y tops that spilled over onto the baking tin. I didn’t mind this, that part actually tasted especially yummy in my mind, but if you want standard, flat top cupcakes, then you could probably distribute the batter among 15 liners instead. I ended up baking a dozen cupcakes in a standard cupcake tin and then using a smaller, 6 cupcake tin for the remaining 2 cupcakes, which I made sure to keep a close eye on and take out a touch earlier to avoid overbaking them. If I were to make this again, I would probably split the batter so that 7 cupcakes were placed somewhat evenly in one tin and 7 cupcakes were distributed in another to help everything bake as evenly as possible. That being said, all of the cupcakes came out perfectly fine when I made them the first time, so I don’t think it’s that big of a deal if you don’t sweat the technicalities like this.  Just have fun with it, and see what looks right when you’re making them! 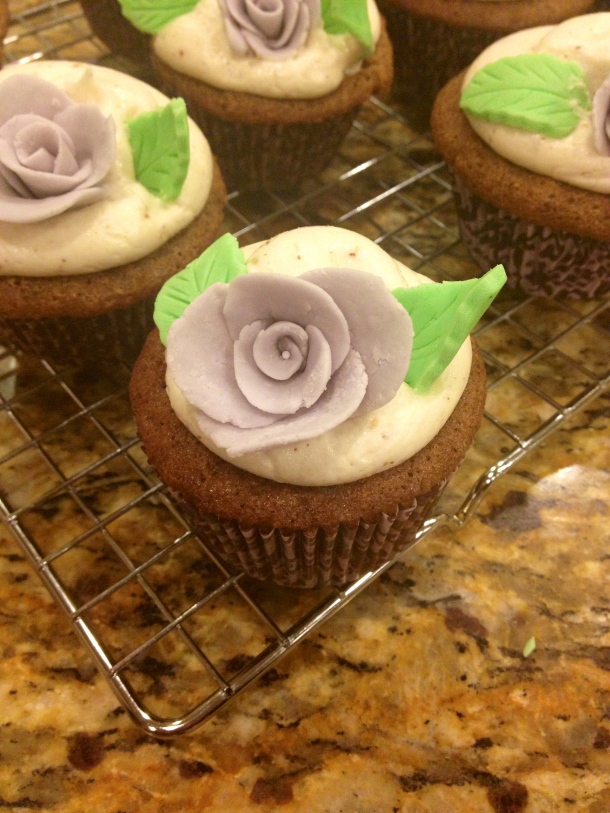 **If you’re wondering about the decorative flowers, they’re made out of marshmallow fondant! I just discovered this recipe for the fondant a few days before making the Quatre Épices cupcakes, and I literally could not wait to try it! I really didn’t know that you could make fondant with marshmallows, but boy am I glad that you can. It opens up a whole new world when it comes to decorations and creative toppers, especially since it’s super easy to make (and normal fondant is just the opposite)! Basically, I just followed this recipe from http://m.allrecipes.com/recipe/191275/recipemarshmallow-fondant to a T, and it came out just like in the pictures/like normal fondant. If it ever got dry while I was working with it, I would just knead in a tiny bit of water or butter (I’m really not sure if you’re supposed to do that, but the dry cracks were driving me insane! Anyways, I found that worked great to improve the texture if it ever became a little less than ideal, so I just thought I’d mention that tip in case you want to try this fondant recipe). Also, I’m assuming this recipe was created to have enough fondant to be able to cover cakes; I had wayyy too much for my primary purpose of creating cupcake toppers! You can see in the pictures that I have sheets of fondant bows, flowers, hearts, etc. just sitting there since I had so much fondant to use up! I feel like that was kind of a dumb mistake, but I thought I’d mention it in case any of you are planning on making this fondant for just a little bit of experimentation (not for huge, elaborate cakes or sheets of smooth, sugary canvases or anything). Really though, this stuff is super fun to play with and also very easy to make. Try it out and let me know how it goes! 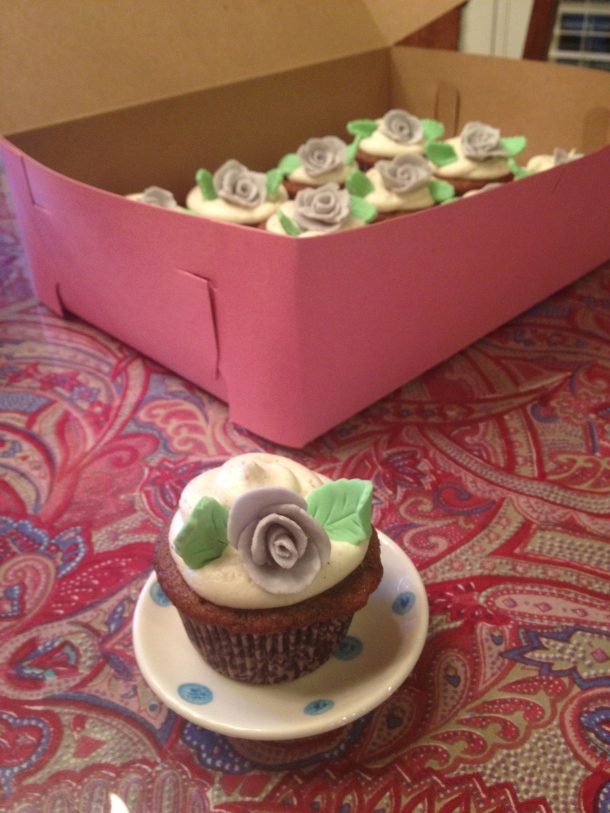