I did it. I finally broke down and made (and, thusly, ate) a red velvet cupcake. I know they’re everyone’s favorite cupcake; they look incredible, they taste delicious, are there is nothing else out there that compares. Still, the idea of eating that much food coloring, seemingly unnecessarily since it doesn’t add anything to the flavor, was just not something I could swallow (hahaha, I’m so punny…). Well, until now, I guess. After all, it was just recently Valentine’s Day, and also, I could hardly go 26 recipes without doing such a classic. Plus, my school was doing a bake-sale fundraiser, and I had a feeling these would be a hit! Now, after making them, I can see why. The red color adds to their unique character and really is an integral part to the cupcake. They’re delicious and beautiful, and I’m glad I finally got the chance to taste one! 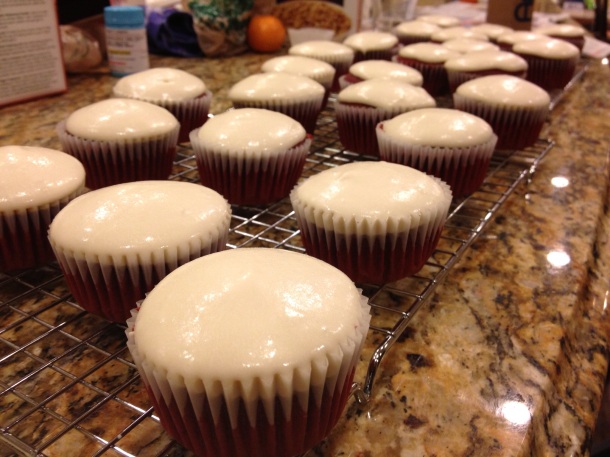 Beat butter and sugar in large bowl with electric mixer on medium speed 5 minutes or until light and fluffy. Beat in eggs, one at a time. Mix in sour cream, milk, food color and vanilla. Gradually beat in flour mixture on low speed until just blended. Do not overbeat. Spoon batter into 30 paper-lined muffin cups, filling each cup 2/3 full.

Bake 20 minutes or until toothpick inserted into cupcake comes out clean. Cool in pans on wire rack 5 minutes. Remove from pans; cool completely. 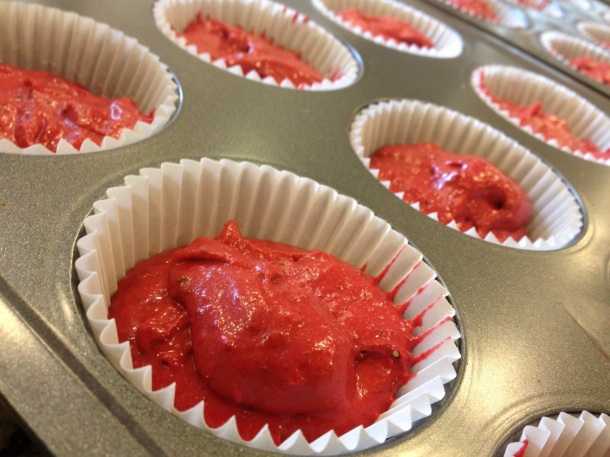 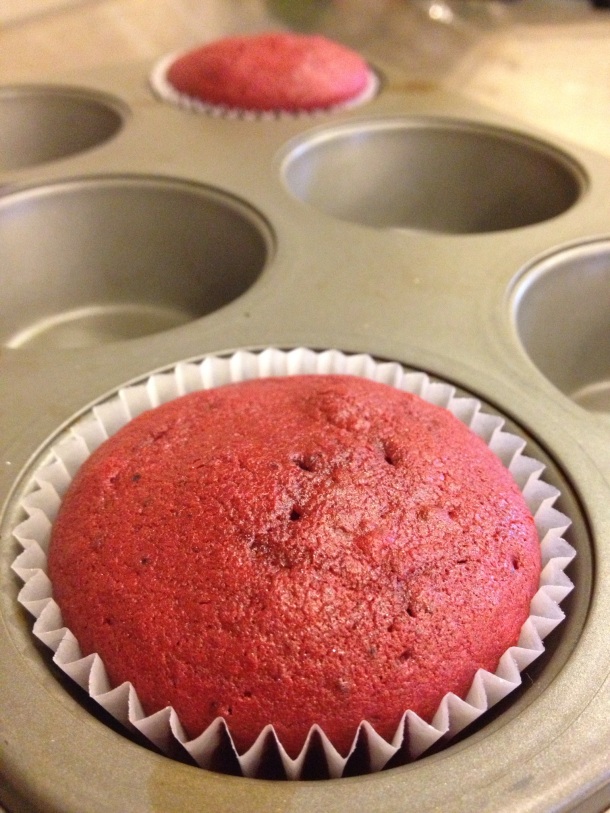 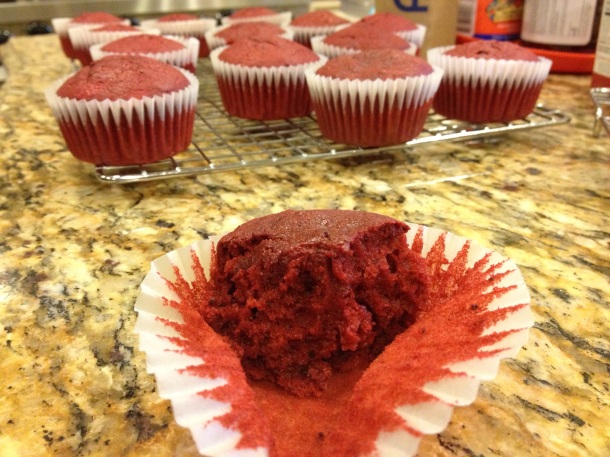 (In the picture above, the cupcake on the bottom right is the most recent one I had frosted. Eventually, it spread out and became smooth, like the others in the photo.)

Everything with the cupcakes went perfectly, although for some reason the frosting was a bit off. Don’t get me wrong, it tasted great, but it had a slightly strange consistency. Fairly liquid-y, kind of stringy. When I tried to pipe it on the cupcakes, it spread out to the very edges and formed a smooth, but very soft, layer over the tops. It tasted great and provided a different look from the standard icing (once chilled again the frosting took on a more matte, slightly less wet appearance), but it was still a little bit messy. If you want a safe, normal red velvet cupcake then I suggest using a classic cream cheese frosting with a thicker consistency, like the one delicious one used in this recipe.

Other than that though, this recipe was perfect! The cupcake was moist and so so yummy! I think this is a great standard red velvet cupcake, and I encourage anyone who is looking for this flavor to try it. They look so pretty and taste just as good. Considering I used to have somewhat of an aversion to these cupcakes, I feel like they must have been pretty darn good to win me over! So please, try these cupcakes and let me know what you think! Do they compare to other red velvet recipes that you’ve tried? Do you love them just as much as I do?