So. Today, marks the starting day of my cupcake blogging journey! That means that by February 5, 2013, I will hopefully have finished and posted about 26 batches of cupcakes, each starting with a different letter of the alphabet. Let’s begin!

A few days ago, I decided to make cupcakes my first batch of cupcakes for our end of proofs party in math (for those of you who have ever had to do proofs for several months on end, you would celebrate, too, if your teacher told you that you were DONE!) Anyways, being that this is the first batch and therefore it must start with the first letter of the alphabet (if you really don’t know, that letter would be X. Haha just kidding it’s A!) I was really having trouble thinking of cupcakes, but finally I just decided to go with a classic apple cinnamon recipe. I know I literally in the last post just said that I wouldn’t be baking with fruit, but seriously, what else starts with A? (besides almond and, like I said, I’m trying to avoid nuts as a safety precaution.) Also, I did mention how I MIGHT bake with apples or banana, and I as it turns out, I had to bake with apples first! Funny how that works…

As I will probably be doing with many of my recipes, I found this recipe on another blog site via Google and borrowed the recipe while following some suggested changes in the comments (thanks to the blog Foodie Reflections ~ http://foodiereflections.com/?p=2831). If any of you feel like recreating this cupcake, here’s the recipe (with changes made):

Preheat the oven to 350°F and line two cupcake trays with liners. It’s best to bake the cupcakes in batches to ensure even cooking.

In a medium bowl whisk or sift together the flour, cinnamon, nutmeg, baking soda and salt. Set aside.

In a large bowl beat the butter until light and fluffy, about 2 minutes. Use either a stand or hand mixer. Add the the sugar gradually and beat until combined. Beat another 2 minutes until both sugars are completely incorporated and the butter is light and fluffy.

Add the eggs one at a time, beating well between each addition. Add the lemon juice.

Scoop the batter into the prepared cupcake trays and fill two-thirds of the way up. Bake the cupcakes 18 to 20 minutes or until a toothpick inserted into the center comes out clean. Cool the cupcakes in the tins for 5 minutes, then remove and cool to room temperature.

Bake the remaining cupcakes until all the batter has been used. Cool all the cupcakes completely before icing.

Combine the butter and brown sugar a large bowl and beat with a stand or electric mixer until well-combined, about 2 minutes. Add the cream cheese and beat until fluffy, then beat in the powdered sugar. Add the apple butter and mix well. Adjust seasonings to taste and spread on the cupcakes to frost.

I was actually really happy with the way these cupcakes turned out! I had never made cupcakes with apples  before, but I think it must be the fruit that keeps these cupcakes moist, while at the same time being nice and light. I followed all of the instructions and used the attachment for the KitchenAid mixer to grate up the apples (the attachment kind of mushed and shredded the apples while squeezing out a lot of juice, but I just poured out whatever juice would come out without any apple bits falling out, and the shredded apple mix seemed to be fine once put into the batter). After following all of the instructions, I scooped the cupcakes into all thirty liners (the batter fits perfectly, and I had enough for all cupcakes without needing to get another pan). Once I put it in the oven, I checked after 18 minutes and took out the smaller cupcake tin, which only held 6, and left the others in the large oven to bake a few minutes longer. I accidentally forgot to set a timer, however, so once I finished my french homework and realized that I had forgotten to take out the cupcakes some 3-5 minutes ago, I rushed back into the kitchen to get them out. The cake tester metal skewer thing came out completely clean which worried me, but they looked pretty ok. As it turns out, these cupcakes remained incredibly moist after they had cooled, although they were so light that some would crumble if you didn’t hold/eat it carefully.

The next morning, I woke up an hour earlier than usual to frost the cupcakes before school. I took the cream cheese out before I got in the shower and got ready for school, so it had maybe 30-45 minutes to warm up. Once I had made the frosting according to the recipe, I realized that it would be fine for spreading onto the cupcakes, but because I wanted to be able to pipe this, I had to make thicker. I added more powdered sugar until it was the right consistency, and the frosting still ended up being super yummy! (according to my mom, it wasn’t too sweet, and according to my teenage brother, it was pretty awesome 🙂 ) I piped all of the cupcakes very generously, and for the first time ever, I still had lots of frosting to spare (well, enough for maybe 6 at least!)  For me, though, that was much better than running out, and I was sure that I would find some way to use it up! 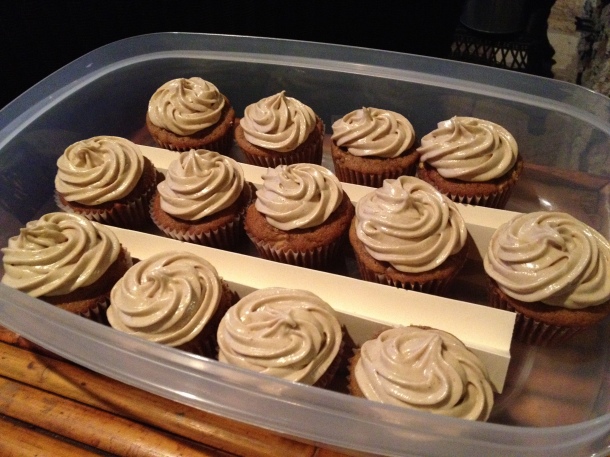 These cupcakes were a hit among my family and friends, and I am so glad that I everyone convinced me to try this recipe! The apples provided a nice taste and great texture to the cupcakes, and this is by far my parents’ favorite recipe (they don’t like really sweet cupcakes usually where as I do, but this apple cinnamon recipe was liked by all of us. Also, the texture was so much better than any usual cupcake, even with being possibly over-baked.) They were a hit at the math party, and even though there were a few bumps along the way with this recipe (purely due to lack of experience or lack of attention on my part, not because of the recipe), I count this as a great way to start of my blog and this cupcake adventure! Next up, the letter B! BE (Get it?? Yes, there will definitely be corny jokes in the blog posts that follow) excited and ready, and if you have any creative ideas for a recipe, please please please post it in the comments! (I was thinking butterscotch caramel?) Thanks so much for reading, and I can’t wait to post something again soon!

Posted in Uncategorized. Bookmark the permalink.
← The amazing bake: day 1
Letter B →